On Tuesday 12th of January at 16.53pm local time the biggest Earthquake to hit Haiti for 200 years struck with devastating force.

Alex Juste was lying on his bed: “There was a big shuddering noise, I felt the bed shaking” he says. “I said “Oh my God, what is this?! I grabbed Tolina and Mary-Lynn (Mary-Lynn is Alex’s daughter, Tolina, one he looks after as his own…) and huddled under the doorway. But the doorway was swinging back and forth. Then it came again – the noise. This time, walls started opening. I could see right into my neighbours’ apartment, I saw everything they had. We ran outside. There was smoke everywhere, dust from the crushed concrete. I took my kids put them some-place safe but I had to see what had happened so I started running. I lost it totally. I was screaming, ‘This is the end of the world!’ There were people under concrete, saying, ‘sir, help me,!’ But I couldn’t do anything.”

Alex’s experience is typical. No Haitian has been left untouched.

The impact of the Haitian earthquake in 2010 on a country already impoverished after years of political crisis and previous natural disasters was huge. According to the DEC (Disasters Emergency Committee)’230,000 people were killed, 300,000 injured and 1.2 million left needing emergency shelter. Survivors have lost family, homes, livelihoods and essential services. Hospitals, schools and government buildings were also destroyed’.

The media response by the news agencies was intense and much imagery especially on the Internet shocking, almost voyeuristic: There are photographs of bodies piled in the streets; in one picture a man removes a body from a coffin so he can steal the coffin. In another we see corpses alight in the street. Dignity in death is absent and a sense of apocalypse pervades.

There is an argument that publishing strong pictures is necessary to shock the globe into fund-raising action; that the scale of the disaster and the inability of the Haitian government to cope led to unique circumstances which needed reporting but perhaps we need to balance this with pictures that allow us to connect with the Haitians with humanity and as equals. This, report tells the Haiti story in a different way. 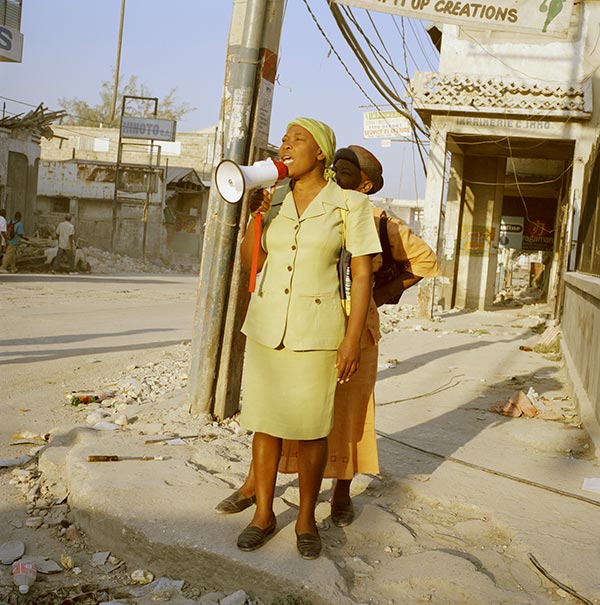