Big Brother is an intimate photographic portrayal of my brother, Justin’s struggle with schizophrenia. It utilises multiple sources of documentation to show his life from different perspectives; his art, my photographs and narration juxtapose with medical and police records. The work reveals a system in crisis, but at its heart is a love story and a project that values and celebrates those suffering from mental health. The work shown here is a sample of the book; to be published with Dewi Lewis.

Schizophrenia is a disease that can wreck lives; it can explode whole families (it did ours) and leave shock waves that can be felt generations later.

One in four of us will suffer from a mental health problem in the UK this year. Despite this, funding is shrinking and increasingly the police have to step in to fill the space; with sometimes absurd consequences.

Justin has been sectioned three times in his life and there is no getting away from the fact that his condition is severe. Yet hopefully as we turn the pages and get to know him better, we see there is more to Justin than his illness. He has interests, hobbies and yes, loves. Justin has been dating his girlfriend, Jackie for over 20 years; although its not always a straightforward relationship. Nevertheless, the love story is central to the projects narrative, revealing their lives and also the authorities ‘Kafkaesque’ and clumsy attempts to both care for, and or control the pair.

Justin’s passion for bird-watching is a theme which knits the book together from start to finish; the resilience he draws from this hobby is an important theme.

This book did not set out to be a political polemic; rather, my intention was to fight stigma and share Justin’s story so we can understand, empathize and celebrate Justin’s individuality. However, inevitably by studying the problems affecting my brother, the work speaks of and draws attention to the crisis in mental health care, raising important questions about how we look after our most vulnerable citizens. 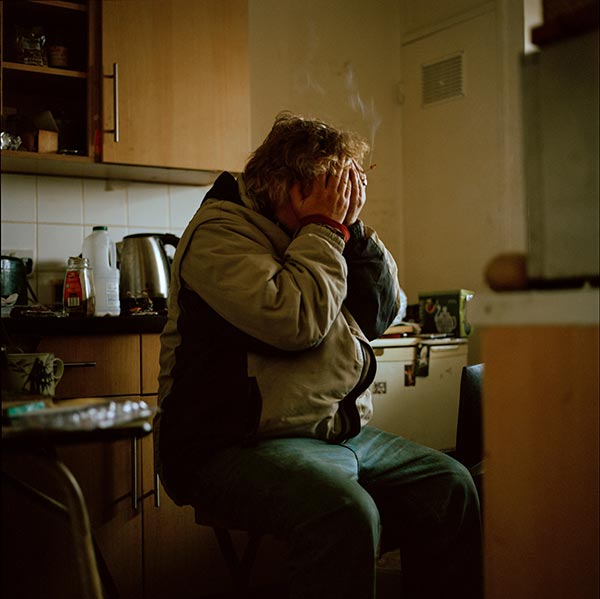 Justin draws and develops enormous resilience from his love of bird watching, the rewards he gains from his trips to bird reservoir’s I share here celebrating the landscape of the birdwatcher in addition to his passion. The film also explores the idea that representations of the outside can have therapeutic benefit to an audience far away from the original source as well as giving us a more intimate sense of Justin.